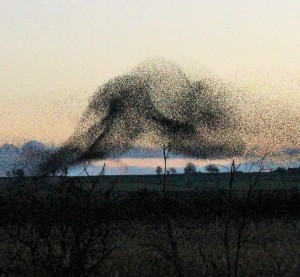 I almost don’t know where to start with this, it just seems such an evident truth to me. My own experiences of work have made me aware of how damaging and inhuman the modern organisation can be, whilst a brief discussion with friends will throw up all sorts of painful stories about how we are treated as customers, suppliers and investors. The way we structure and run organisations today just doesn’t work for most people.

The dominant analogy for a modern organisation is as a machine. It’s been the model since the first factories were created over a hundred years ago, with the specialisation of labour and the division of the creative process into separate, repeatable tasks. It has such a string hold on our minds and is so ingrained into our worldview that we struggle to think of other possibilities.

The machine has been tuned and perfected over the years in an increasingly frantic pursuit of efficiency. What has been achieved is truly amazing and has brought us massive economic growth and rise in living standards. Until recently.

You see, the problem is that the machine is reaching its physical limits of power and efficiency. And you know what happens when the machine is pushed too hard. It starts to crash its gears and break the teeth off of cogs (that’s us, by the way). It starts to overheat and melt components (oh, that’s us again). It starts to shake and rattle and parts fall off (er, yep, us again). The heat and the noise and the vibration rise to intolerable levels, putting all the components under enormous stress (I think you get who that means, by now).

And that’s not the only problem. Machines are very effective in the environments that they are designed for. If the environment changes, however, it can cause enormous problems for the machine. I mean, a formula one car is a marvel of engineering and the king of the race track, but it’s not much cope if you try navigating a river. As a race car, supreme. As a boat, not so much. Or at all, in fact.

And our environment is changing. Massively. Rapidly. Unexpectedly. The machine can’t easily adapt, so the only option is to crank it up some more. This is not going to end well.

So we need new types of organisation that can adapt to rapidly changing environments. Something that is more flexible, more mutable, more organic. So why not centre the organisation around people, around one of the most creative and adaptable species on the planet?

We naturally change and react to the environment around us. We develop new behaviours, new skills in response to new situations without thinking. It’s what we do, it’s what has made us evolve and become the dominant species on earth. Doesn’t it make sense to put the innate skills and potential of human beings at the centre of our organisations? To build our natural evolutionary capabilities into their very fabric, so that they can respond and adapt like us?

And these organisations will also stop people being shredded and ground down by the world of work. No longer reduced to a cog in the machine, no longer a compliant if slightly inefficient and unpredictable robot blindly following the process. Instead, a powerful, vital and vibrant human being, fully participating in life and realising their potential.

This is possible, examples exist already. These organisations are more human, more adaptable, more innovative and more productive places for people to work. I believe this is the way forward. So let’s make the future happen sooner.