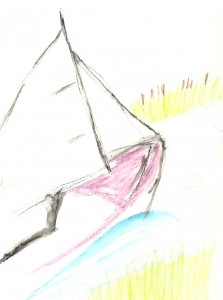 This is my piece of art. Ok, it’s not Van Gogh but I enjoyed making it. It’s a picture of one of my ‘happy places’, sailing on the Norfolk Broads (you think this is bad, you should see the one I did of skiing..). The point is, it was the first time I had done painting as a way of expressing myself since I stopped doing Art in the third year of senior school (Year 9 as it is called today). It opened up a whole new perspective for me, one I hadn’t taken for decades.

It all felt a little awkward at first, as I sat there with several other ‘business people’. I couldn’t decide what materials to use at first – pencils, paints, watercolours, charcoals. However, once I had plumped for some crayons (which turned out to be water-colour ones) and whatever else was on the table I had sat down at, I just got absorbed in the doing and forgot my discomfort.

My friend Doug Shaw, a co-presenter of the workshop and the one who had got us all doing this, is a big proponent of using art in the workplace as a way of helping people access their creativity. It’s also a way to get people to explore issues of vulnerability and shame. He referred to the work of Dr. Brene Brown, who found from interviewing over 13,000 people that 85% of them said they can recall a time in school that was so shaming it forever changed how they thought of themselves as learners and that 50% of those recollections related to art and creativity.

I remember having a particularly psychopathic Art teacher who would roar out “What the hell is THAT supposed to be?”, clip the poor soul around the ear and then parade their work around for the class see whilst he ridiculed it. God knows how many people he stopped from ever doing anything creative again, whilst introducing them to the wholly destructive concept of shame.

So we all pushed through our discomfort and any shame that we had and some of us even stood up and shared what we had done. (Yes, I really did stand up and show that. I don’t do shame any more.)

Now, here’s the thing. The other co-presenter, Herman Miller, design workplaces, and a very good job they do too. Their showroom, where they kindly hosted the event, is full of really great layouts and furniture (they also do loads of research and presented their latest work, which I’ll cover in another blog). One of the big issues for large organisations is creativity and the ability to innovate and Herman Miller have lots of concepts and strategies to encourage this but as far as art goes, that’s just the stuff that goes on the wall (to be fair, their excellent designs count as art as well). It’s a passive experience. So what about putting art rooms in offices the design? Why not have spaces and materials so that people can just go and do some art, using different parts of their brains and bodies to what they do the rest of the time?

Not only would this be good for encouraging creativity but it would also have a well-being payoff. Imagine spending your lunch time playing around with some paints and charcoals rather than catching up on Facebook and the Mail Online sidebar of shame?. Wouldn’t that put you in much better state of mind and provide you with a real break so you come back energised and relaxed? It would also help to break down the barriers of shame and open people up to each other more, allowing them to be more vulnerable in a non-threatening way.

So what about it, Herman Miller? Get your clients to throw out the fussball tables and put some art rooms in instead.