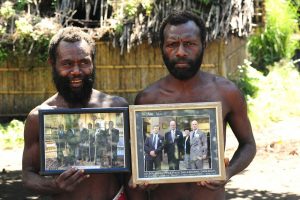 It’s not me that thinks Prince Philip is God*. I mean, that’s ridiculous, isn’t it? No, it’s the Kastom people who live on one of the islands in Vanuatu, in the Pacific Ocean.

So why do they believe this?

According to their ancient tales, the son of a mountain spirit travelled over the seas to a distant land. There, he married a powerful woman and in time would return to them. They saw the respect accorded to Queen Elizabeth II by the colonial officials and concluded that her husband, Prince Philip, must be the son referred to in their legends. He must be a divine being.

This is an example of a Cargo Cult, something I studied in Social Anthropology at university. These sprung up all over the Pacific Islands, one of the more popular forms being to build landing strips and conning towers in the jungle to attract the ‘big white birds’ that they had seen bring fabulous riches to their colonial masters. What was fascinating to me about these cults is that they would sometimes be led by people who had been to Britain and educated at our universities. On their return, despite having the critical faculties and knowledge to see the cult as nonsense, they would fall back under the spell of the belief system.

There is a kind of logic to it all, though, isn’t there? They have  created up a story from the facts available to them and their prior beliefs, one that makes sense of what they have observed and gives the a hope that they can achieve a better situation than they now have, that they can also share the riches of the elite.

What foolish savages, eh? I mean we never do that do we?

We just spend most of our time and energy working, which makes us miserable and unhealthy, so that we can earn lots of money because then that will make us, er … happy. Like the rich and famous.

*No, he’s really not. Perhaps it’s David Beckham, though. Or Kim Kardashian.