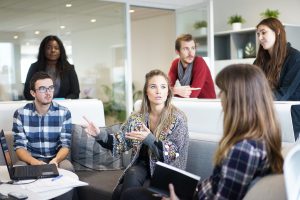 According to the anthropologist David Graeber, most people in our economy are doing “bullshit jobs”, meaningless activities that only serve the machine and feed the hierarchy rather than make a real difference or economic contribution. Fewer and fewer people are doing productive jobs because these are increasingly being automated away, as was predicted by the economist John Maynard Keynes. However, Keynes also predicted that by now we’d all be doing 15 hour weeks and enjoying lots of leisure time, whereas it seems that these ‘bullshit jobs’ have proliferated to keep us all working. Instead of being time rich, we are time poor.

And now the robots are coming. We are told that algorithms, robots, artificial intelligence and a wave of other technologies are going to come and eat the jobs we have. It seems the machines are even better at the bullshit jobs than we are and are making inroads into the productive jobs in ways that we never thought possible (self-driving vehicles, burger-flipping robots and customer service avatars are just the first ripples of this next wave).

So what happens now? If even the bullshit jobs are going to disappear then what are we all going to do? Will we finally get to live in a Keynesian utopia of expansive leisure time interrupted by short spells of work? Or will some new ‘super-bullshit’ jobs emerge to occupy us? Will we see an explosion of creativity, fuelled by all this free time and perhaps supported by a Universal Basic Income? A flowering of the arts and entrepreneurship, a modern renaissance? Or will we become enslaved to the machines, addicted to ‘entertainments’ and trapped in the virtual realities of a dystopian future?

This isn’t about economics, or technology, or even politics. It’s about all of those but it’s also about our choice, about our vision for the future we want to see. Utopia or dystopia, it’s up to us to decide.

P.S. Before you get too anxious about the rise of the robots, the future may require quite a lot of debugging: Self-driving bus crashes less than two hours after Las Vegas launch