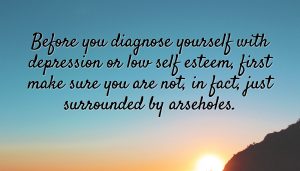 I have a rule now that I work for myself.
It’s the ‘No Arseholes’ rule.

If I see any evidence of arseholery going on, I call it out. Even in myself (and if I miss it, I encourage you to bring it to my attention).

Because there’s no need for it. In fact, it gets in the way of us being proper human beings and realising the talent and potential within us.

I can’t completely rid my life of arseholes because there are people who enter my life unbidden and spread their arseholery around my existence without my permission. Like the arseholes who think it’s OK to stop the traffic whilst they pick up their dry cleaning/party balloons/kebab because   it would kill them to find a parking space. Or the arseholes who think it’s OK to park on the pavement because, der, they’ve put their hazards on!

(I might be slightly obsessed with car-related arseholery. There’s a lot of it about where I live. And I don’t even drive that much!).

But in the places where I CAN decide who comes into my life, then the ‘No Arsehole’ rule applies.

I’m not rude about it. I simply decline the offer to work with them. I remove myself from their presence. I don’t follow them on social media. I don’t engage them in conversation.

I’m not absolutist about it either. There may be occasions where it is easier to tolerate an arsehole for a short period, safe in the knowledge that it is time-limited and won’t be repeated. Sometimes you have to take one for the team, sometimes a little local discomfort is preferable to causing a major incident.

You often hear the complaint from corporate management that ‘millennials’ lack respect and won’t follow instruction. I think the real truth here is that millennials have already adopted the ‘no arsehole’ rule. It is just a natural part of their makeup, like incessantly using social media and never deciding what they are doing more than 5 minutes in advance. They simply won’t put up with the bullshit that the generations before them did. They won’t work for the arseholes that we did because, well, they don’t have to. In fact, they have a naturally low tolerance for arseholery of any sorts.

Which makes it very difficult for an arsehole to manage them. And that seems to me to be a thoroughly good thing. So if you find it difficult to manage millennials, you might want to step back and take a moment to reflect on whether you are being and arsehole or not. And if you’re not sure, the answer is probably yes.

I can’t claim credit for this rule. It was coined by Bob Sutton, a Stanford professor, in an article for the Harvard Business Review called “More Trouble Than They’re Worth” and he expanded on it in his book “The No Asshole Rule: Building a Civilized Workplace and Surviving One That Isn’t”. I have anglicised it and interpreted it in my own way. (BTW, if you are wondering why I haven’t provided a link to Amazon for the book, that will be because Amazon is awash with arseholery and I do not wish to promote them, as I will explain in a future blog).

There’s also an antipodean version, the ‘No Dickheads’ Rule. Please feel free to adapt this to your preferred cultural style. The sense of it remains universal.

There is a slight problem with Bob Sutton’s book, however. Many companies have embraced the ‘No Asshole’ rule and yet there seems no abatement of arseholery in corporate life.

In fact one of the most enthusiastic adopters referred to in Bob’s book is Barclays, which is problematical. Firstly, because the life-blood of the banking and financial services industry seems to be a constant supply of arseholes of all shades and descriptions and it seems almost to be a signature trait of those who succeed. And secondly because Barclays was run by Bob Diamond, who we now know was a galactic-sized arsehole (although plenty of us had our suspicions before his fall from grace because, frankly, the signs were there and writ pretty large).

But even so I think Bob has made a major contribution to human understanding and the sphere of work. Perhaps he’s played it a bit too nice, a bit too safe, a bit too corporate. But then he is a Stanford professor and part of the establishment, so there’s a limit to how far he can push the boundaries before they stop inviting him to faculty parties and intellectual soirees. Let’s face it, no one wants to be snubbed whilst picking up the groceries in Whole Foods.

We don’t have those constraints, however. We can be free to call an arsehole an arsehole, no matter what their station or status in life. From pauper to President, if we see an arsehole then we call them out for what they are – an arsehole. In fact, it’s our duty. We need to rid the world of arseholes for the sake of humanity and the planet.

And if you don’t believe me, just take a look at the Arsehole-in-Chief to see how dangerous these people are, to all of us.

So join me and embrace the ‘No Arsehole’ rule. It will make your life SO much better.